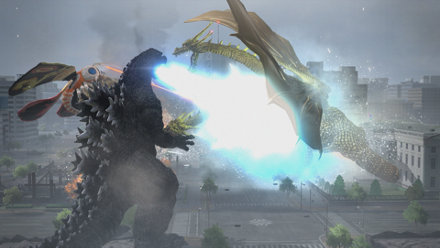 Godzilla, the King of Monsters, first appeared in 1954. Scientists studied Godzilla and found that they could harness energy from the monster. Called "G-Energy," this seemingly endless source of power was used to better the lives of all mankind. 60 years later, just when mankind's memory of the beast faded, Godzilla appeared again. Godzilla destroyed at will, all in search of more G-Energy. Such irony, the same G-Energy which was used to better the people's lives, also casued Godzilla to awaken. Can the G-Force, mandkind's last hope, stop Godzilla? What fate awaits Godzilla once he has consumed all of the G-Energy, and grown to his full potential?

Bash your way though each stage to take out the Energy Generator and proceed to the next area. Be sure to smash as many other buildings as possible to maximize your G-Energy. But beware, because the more buildings and structures you take out in the stage, the higher the Hazard Level will go, bringing out legendary monsters to battle. 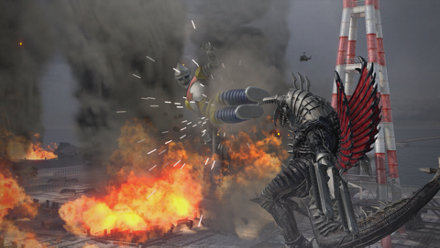 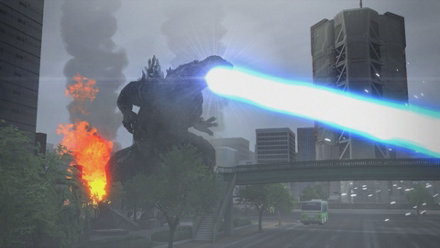 Players can choose to view the action with a special Movie-Style Camera Angle System. Choosing this camera angle switches the camera view to special, pre-set locations on the map. Players can switch to the special camera points, and control Godzilla as seen just like in the movies! 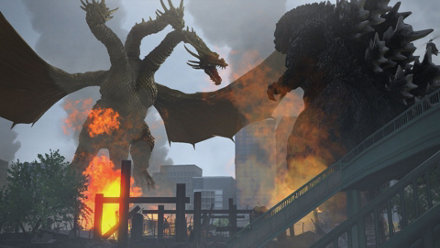 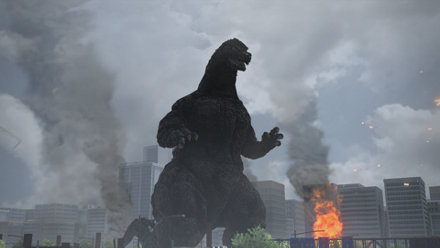 Prowess will increase in line with his size. Godzilla will also learn new skills, and you can power up his beam as well!  Power up enough and Godzilla will even fly!